What is – or may be – the source of creativity? Possible answers to that question are as varied as are artists. In each individual case, the factors and reasons for personal engagement in the creative process are different. In light of the ambiguity of this phenomenon, it might be said that the impulses responsible for individual efforts at artistic expression, that is the formulation of one’s beliefs through the medium of art, are situated somewhere ‘between determination and fortuity.’ For the creative process is dominated by an internal need to express what has accumulated in the psyche (both in the conscious and the depths of the subconscious) of the artist through the course of life in all its sensual and intellectual aspects: in the harmony of feelings, impressions, imagination, thoughts and intentions. In this externalizing, the artist is constantly subject to chance impulses: events and discoveries, insights and receptiveness to the unexpected and unobvious that may result from the confrontation of current events with past experiences, recorded in memory, which may at the same time be unpredictable, surprising and inspiring.

This process could therefore be the effect of our mind’s projections as well as suggestions of the imagination, sanctioned by sensitivity with its arsenal of feelings and impressions. This fixed area may be, and sometimes is, disturbed by accidental events, impulses that draw the attention and receptivity of the subject to new, unpredictable paths of sensations and discoveries, reflection and fulfilment in the final form of the work of art.

These general remarks pertain specifically to the two different types of creative activity, two attitudes presented in the exhibition entitled “Incidental and Accidental.” References to the sources of determination and fortuity are characteristic of these examples and, at the same time, they are to a certain point symbolic of the experiences that both artist had at the beginning of their creative careers, in the so-called ‘photo-media’ movement, which engaged their attention in the second half of the 1970s. 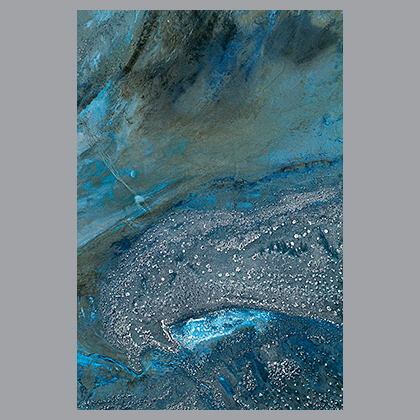 Both authors presenting their series of works in this exhibition began their artistic paths with adventures in photography. This was in the 1970s, at a very significant moment in the context of the state, and crisis, of art, caused by new ideas that concluded the after-war developments of modernism in its neo-avant-garde versions. On one hand, manual skills in painting and sculpture were being contested, and replaced by the so-called awareness approach, which put the artist’s ideas and intentions first, negating in fact the need for any material trace of this creation (in the form of a painting, sculpture, etc.).

On the other hand, the need to, nevertheless, somehow record these conceptual manifestations gave to photography new practical possibilities, raising at the same time its rank as a medium to that of a fully-fledged artistic form of expression. This departure from the hitherto mainly documentary role of photography (and its earlier pictorial ambitions) was the prelude to an exploration of the properties of this new medium and an analysis of its relevance in the context of art as a whole. Thus interest in the role and position of photography in the field of visual arts was born, resulting in the expansively developing at that time photo-media approach in creative uses of the medium.
The tool – that is the photographic and video camera – determined, as it were, the creative process, prompting its users to investigate the artistic and medial possibilities it gave.

This direction of artistic inquisitiveness was already present in Poland in the 1960s. It was visible especially in the explorations and creative discoveries of artists of the neo-avant-garde circle concentrated around Zbigniew Dłubak, the Permafo gallery, the Pod Mona Lisą gallery, directed by Jerzy Ludwiński in Wrocław, or the Warsztat Formy Filmowej (Studio of Film Form) in Łódź.

These pioneering artistic explorations, which resulted in the nobilitation of artists who made what was called ‘concept art’ (sztuka pojęciowa), a version of conceptualism, were further developed in the photo-media trend, among whose patrons were

BETWEEN DETERMINATION AND FORTUITY  — Andrzej Saj

Zbigniew Dłubak, as well as Andrzej and Natalia Lachowicz (Permafo), but which was also referenced by younger Fine Arts alumni. Ryszard Tabaka and Ireneusz Kulik, living at that time in Gliwice and Katowice, as well as Leszek Szurkowski, who was working on his visual experiments in Poznań, were all within the realm of this movement. The artists met in the second half of the 1970s in the Wrocław Foto-Medium-Art gallery (run by Jerzy Olek from 1977), where they continued their earlier artistic explorations in a larger group, which allowed them to present ‘border states of photography’ and attempt to determine the rank of photography as a medium of art. This rather spectacular period of the gallery’s history ended in 1982 with the emigration of several of its members and the suspension of its creative seminars.

The emigration phase in the lives of participants of the photo-media movement posed different problems and requirements. An important change in consciousness in the movement itself also came about at the turn of the 1980s and 1990s. Photography began to turn to its own specific problems of ‘spiritual’ interpretation (fotoelementaryzm), and later, subjective document (fotogenizm) or stagings of reality, made possible by the new technology of digital cameras and computer programs.

Today, the situation of photography as an art, because it has clearly been raised to this rank, is quite different than it was in previous decades. The pressure of commercialism (in production, fashion, advertising) makes it even more difficult to create challenging, genuine work that makes authentic statements, untainted by practical purposes (which does not signify that commercial realizations cannot have their own high aesthetic or intellectual value). 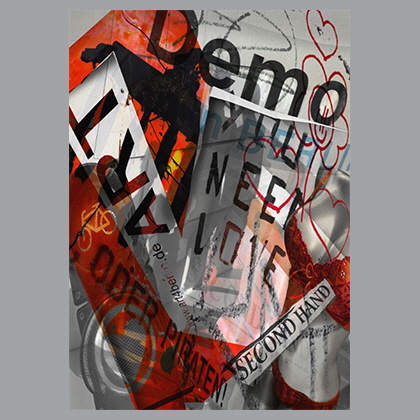 Ryszard Tabaka and Leszek Szurkowski present two opposing sets of images which are, however, joined at their roots. Tabaka’s “Incidental Landscape” series presents ostensibly naturally shaped landscapes, in which one can recognize waterways, hills, crisscrossing fields or the texture of the terrain – an iconography of the natural world. In fact, however, these are intended to be ‘open works’ (in Umberto Eco’s understanding of the term), in which the scale of interpretation allows for various readings and offers up new possible perspectives on this world. This sort of ‘game’ between naturally shaped space and interventions, such as slogans or gestures, was already present in the artist’s photo-media era work.

Szurkowski on the other hand calls his collages – which combine various art forms with street typography – “Accidental Street Graphics.” They are essentially graphic works which treat photography as a base material, and present the chaos of the cultural environment. The artist convincingly shows the contemporary visual ‘dumpster’ in a perfect illustration of Zygmunt Bauman’s thesis of the shallowness and instability (liquidity) of our postmodern culture.

The works of the two artists seem to belong to the clearly opposing worlds of nature and culture. The reception and sensations of the natural ‘map’ of the Earth is the domain of determinism – nature is ruled by its own unwavering laws. On the other hand, the perception and experience of the urban iconography of the city street, teeming with artificial icons (advertisements, slogans, events) is in the work of Szurkowski a sort of glorified coincidence. Such a strict reading may of course raise objections. Is not Tabaka also under the influence of chance juxtapositions of forms, light and shadow in his landscapes? And does Szurkowski not, with obvious persistence, attempt to organize the signs of cultural reality and compose them into meaningful images?

What is the answer? Only the artists know – but do they? Is the creative process in its inscrutability, its play between the accidental and the determined, not too mysterious and complex to be explained? Conversely, if everything was known and evident, would there be no need for art?