This, what the artist creates and leaves for independent
life, begins to function only when it meets the appropriate sensitivity

In the early 1970s, groups of artists appeared in Polish photography that began to question the nature of the medium itself. Reflection and analysis on this subject became the main domain of thought and artistic practice of, among others, the founders of Galeria 2 in Katowice: Ireneusz Kulik (an active participant in Katowice’s underground scene) and Ryszard Tabaka (previously associated with the Gliwice group ZOOM).

The exhibition and symposium entitled “Border States of Photography,” organized in Katowice, was an element of the multipart action of the Wrocław group Seminar Foto-Medium-Art. During its activity, Kulik and Tabaka came into contact with visual experiments of Leszek Szurkowski, whose interests were focused on the demarcation and experiencing of the limits of photography.

The manifestos formulated within the realm of the Foto Medium Art seminar (“Art as a Medium of Art”), as well as exhibitions organized with Jerzy Olek and Alek Figura (“Photography, Medium of Art;” “Black and White;” “From Zero to Infinity… From Infinity to Zero”) located them within the tradition of conceptual art. Their artistic practice and accompanying statements echoed their research like systems and procedures. The artists attempted to find the simplest elements determining a work of art, making use of scientific theories and methods. However, as opposed to other post-conceptual tendencies, the interests of this group included the technological analysis of photographs and its perception in the mind of the onlooker.

The title of this exhibition – “Incidental and Accidental • Między Determinacją a Przypadkiem” – refers to two trends in the work of the presented artists.

On one hand, we have the explorations and reflection of the late 1970s concerning the perception of reality through photographic images. The search for answers to the questions then posed required parascientific, deterministic procedures and sometimes ‘laboratory like conditions’ for the analysis of their results. This was the case, for example, of the workshop in Turoszów (1978), when Ireneusz Kulik (“Breaking through the Landscape”) and Ryszard Tabaka (“Beyond Form”) showed, through spacial installations, the relativity of the real image in relation to its photographic record. In works by Leszek Szurkowski from this period (“Penetrations”), a chosen image is delved into by means of a carefully specified enlargement in such a way that the final result of this ‘analysis’ is no longer a representation of outer appearance, or in fact anything distinguishable, but becomes instead ‘a contextless texture and the technological qualities of photography.’

On the other hand, we have creation of the last years, spent in emigration – a conscious ‘reliance on fortuity’. 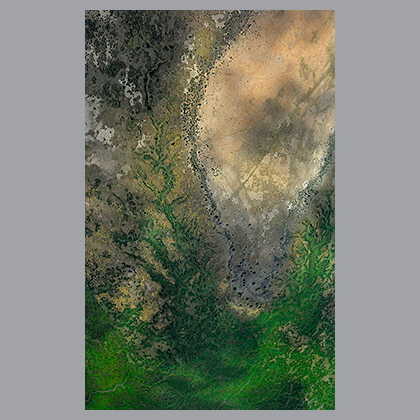 Tabaka’s works are ‘reflections of reality’ made with the intentional use of the medium of photography. This is, however, the full extent of the realm of planned intent (of the artist’s participation), the rest is left to the chance interpretation of the perceiver of the object. Tabaka’s visualisations, because of their ostensible legibility, with their references to painting and photography, provoke random connotations in the viewer. At the same time, they make him realize that the presented image, in all the intentionality of its choice, is only an insinuation of a fragment or sequence of reality, the realness of which we may touch upon through our personal confrontation with the work.

Fortuity in the works of Szurkowski, who treats photography as a ‘visual note,’ can be seen mainly in the choice of fragments used to construct his images. Because of the combinations of thematically varied photographs, the effects of these preparations could be called collages. In many cases, we can notice intentional allusions and subtle quotations, referencing, for example, advertising, graffiti or architecture. However, an even more apt term would be not collage, but montage, because an important aspect of the composition process of these images is the relation not between the visual references and subtexts, but that between the combinations of various elements used, that, only once put together, suggest a coloristic or thematic integrity.

The products of these photographic montages are fully autonomous objects.
This is how Leszek Szurkowski himself describes them:

A controlled composition/montage serves as a visual message in what may be called a classic form. Yet, it shows the random chaos of the surrounding iconosphere. Typographic references and symbols are meant to locate this idea or encourage reading, and thus, to nonetheless become accustomed to and navigate an image or space. This ‘reading’ may however be chance and random. The form is meant to facilitate an understanding of the message; it results from the classic canons of reception of images and the physiology of seeing in our culture. It is not an end in itself. From experience on working on this series comes the conclusion that we are still submerged in a culture of words, letters, alphabet despite the fact that we so often hear that we have reverted to visual culture and communication. Another conclusion is the presence of symbols and the embedding of traces of man in this visual chaos.

Both authors began their artistic careers in the time of analogue photography. Their experiments from that time are strictly connected with the technical restrictions then present. The move into digital photography was, like for all fans of the medium, an epic change. One of the goals of this exhibition is to show the effects of the two artists’ activity in differing technological conditions and how each of them makes use of new possibilities.

The exhibition also has a historic aspect, as it presents a sliver of the history of Polish modern art. Both artists left the country in 1981, interrupting their work in the Foto Medium Art seminar. Both Szurkowski and Tabaka continued his own deliberations within a different cultural and professional context. Each, Szurkowski in Canada and Tabaka in Australia, adapted to a new environment and new circumstances in his own way, while retaining his earlier interests. Both reactivated previous experiments and studies on corresponding themes. The question arises, what did this emigration – this opening up to the world, to new cultures and languages, this an enriching of visual experience – give each artist? As an artist, not as a tourist or emigrant. 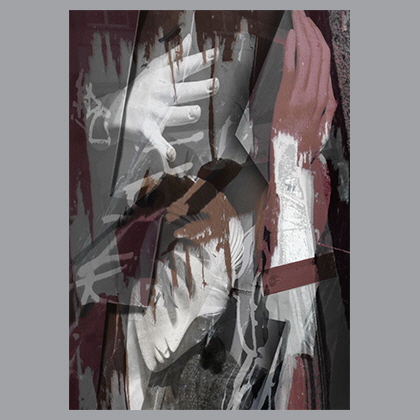 For Szurkowski, for example, ‘juxtaposing and comparing, searching for the meanings and essence of particular places’ played and still plays a key role. The diversity of places is what results in their ‘differences, varied styles, symbolism, color.’ The fundament of his montages is ‘the perception of these differences and the study of their meanings in the reception and recognition of the iconosphere in which we function.’

For both Tabaka and Szurkowski, this diversity has had in the last decades a positive and creative practical side. ‘We do not necessarily have to complain about the excess and chaos of the information we are surrounded by. It would be better, for the intensiveness of emotions and the reception of meanings (both incidental and accidental), if we tackled this chaos in a creative way.’

While in the works of Tabaka, visual recordings concern nature and its minimalistic effects (in this way indicating a specific type of ‘reading the surrounding world’), Szurkowski’s point of reference is the cityscape – only captured in a different scale and from completely different perspectives. The effects of his work may be seen as the author's efforts to share his emotions and observations.

The artists’ visual statements differ not only through their objects, but mainly through their scale and fragmentary penetration of reality. But they all propose returning to an attempt to concentrate on the effect of media registration (lost in the era of social media and the surrounding visual chaos) and to a direct dialogue and bilateral communication and discourse with the receptive viewer.
An attempt to confront the results of these studies after all these years is another goal of the exhibition.

The use of the following publications is kindly acknowledged