Lawrence English is media artist, composer and curator based in Australia. Working across an eclectic array of aesthetic investigations, English’s work prompts questions of field, perception and memory. He utilises a variety of approaches including sound, installation, projection and polymedia objects to create works that meditate on subtle transformations of space and ask audiences to consider that which might sit at the edge of or beyond their perception. His pieces have been presented widely in Europe, the UK and Japan, as well as in the USA, NZ and Australia.

Many of English’s works draw on ideas of spatial field and relativity. Trio For Objects (2008) for example, presents three discrete sound installations (kinetic, prepared and sculptural) which, when experienced in unison, create a ‘relational sound field’. By contrast, the 3-screen video installation Ghost Towns (2003), seeks to create an abstracted ‘virtual map’ of remote Australian spaces where the processes of natural reclamation are erasing the presence of human settlement. In 2006 English produced a series of sound art works specifically for the deaf and hearing impaired under the title Silence Listening.

These works were amongst the first of their kind in the world, exploring and examining the notions of isolation and sonic interaction within these oft- marginalised communities. He published the book, Site Listening in 2009, developing a new methodology for engaging with sound encountered public and environmental spaces. In 2010 he undertook a month of fieldwork in Antarctica under the invitation of the Argentinean government, and created The Antarctica Suite a collection of audiovisual works including the 10 screen, 8.8 sound installation titled The Monolith.

As a curator, English is actively involved in the development and increased recognition of sound art within Australia, curating an ongoing series of sound related projects for the Institute Of Modern Art under the name Mono. He has curated exhibitions of international (and Australian) sound artists such as Melatonin (which debuted in Next Wave 2004 and continues to show through to today most recently in December 2011 as part of Feta Dele WSK in Manila), Gravities Of Sound (as part of MAAP in Singapore) and Audible Geography (for the University Of Tasmania).

Outside of his art practise, English composes provocative sound and music of which The Wire notes ‘the use of space and silence is remarkable’ and Signal To Noise calls ‘extraordinarily gorgeous modern music concréte’. He has written extensively for publications orbiting topics of music, art and culture. English also directors the imprint and multi-arts organisation ROOM40 (www.room40.org) maintaining a steady release schedule from an eclectic array of Australian and international artists and producing a number of sound and music festivals annually including Open Frame (both in Australia and the UK). 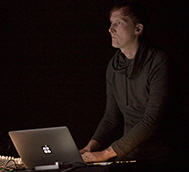