Ever since the double term “concrete photography” was first mentioned in the 1960s, and then revived around ten years ago, a number of publications have documented its history, its theory and its practice. Yet the roots of concrete photography go back much further and originate in the thoughts of the German philosopher Konrad Fiedler (1841–1895) when he considered the “visibility of the image” in 1887. Twenty years later, they reappear in the words and works of the American-born English Vorticist Alvin Langdon Coburn (1882–1966). Coburn was a pioneering concrete photographer and the first to formulate its programme, enhancing the latter in a logical, aesthetically compelling manner with his Vortographs – abstract and entirely self-referential camera compositions made of light and shadow. Concrete photography could subsequently be regarded as a particular form of photography in general and as an autonomous form of concrete art – although the term “concrete” did not as yet exist in an artistic context at the time. It only found acceptance through Theo van Doesburg’s manifesto of concrete art, which led to the universal idea of concrete art and its practice in the fields of painting, graphic art, sculpture and later in poetry, music, dance, film as well as eventually in concrete photography.

After Coburn, corresponding forms and images emerged in the wake of experimental photography at the Bauhaus and in the photography of the Neues Sehen in the 1920s, as well as in West Germany after 1945 when the fotoform movement picked them up once again. They were developed further by subjective, generative and concept photography, the projects of which gradually exposed the autonomous structures of the photographic process, making them visible with their very own intrinsic means. Indeed, all of this is written history and has often been codified, not least by activities in Würzburg in connection with the collection of Peter C. Ruppert. We could therefore almost consider it a topos that is meanwhile well established in the history of photography and art, and simply move on – were the traces of concrete photography simply lost there. This, however, is not the case. The traces lead to a lively present and even beyond. We are required to investigate in various directions.

ON THE CONCEPT OF THE TRACE

A trace is laid, a trace (in German: “Spur”) is followed, a trace indicates the direction: the concept of the trace is a vivid figure of speech. At the same time, it is a technical term in semiotics and part of the semiotic triangle comprising icon, symbol and index (after Pierce; in German also: “Spurbild”), thus allowing us to examine concrete photography closer and to contextualise it. Furthermore, the concept of the trace has metaphysical potential as the expression of the mysterious, arousing curiosity and demanding an answer. With its aura between immanence and evidence, between self-reference and external reference, the concept of the trace is therefore intimately related to our topic: concrete photographs are images of traces.

TRACES OF THE PAST – LIGHT IMAGES

Fiedler As far as the historic trace is concerned, we have already mentioned Konrad Fiedler. He defined a concept of the image in which “the forms of the image are autonomous from any aesthetic or cognitive functions”. This was an unusual notion at the time which refuted the idea that an image had to depict or represent something in order to be a “picture”. It seemed inconceivable that the “forms of the image” could be void of any such notion one day. Yet the idea led to one of the great artistic achievements of the twentieth century: abstract art – followed by concrete art, whereby there are of course clear distinctions between the two. Fiedler provided them with the central idea that “something is created which seems to be present only on account of its visibility” (emphasised by G.J.). This established the formula for a new pictorial understanding: the visibility of the image! Neither the depiction of the visible, nor the visibility of the non-visible, nor the reflection of perceptions, but rather the production of visibility alone provided the grounds for the image. It was only to be visible.

Such words evolved into an image a mere twenty years later. The historic date is 1910, the year in which Wassily Kandinsky (1866–1944) painted the so-called “First Abstract Watercolour” (fig. 1). Even if abstract pictures might already have been produced 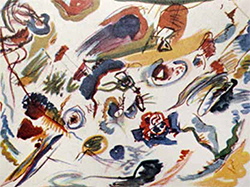 , Kandinsky was the first “who truly reflected on and simultaneously experiment- ed with the aesthetic possibilities of communi- cating meaning through non-figurative forms and colours, ushering in a new aesthetic era”. It was to take another twenty years, however, until the image found its proper designation: “concrete painting”. In 1930, Theo van Doesburg and his colleagues published the liberating manifesto: “Concrete painting, not abstract, because we have left behind us the time of searching and speculative experiments”. Words and images may be allied partners at the interface of scientific theory and artistic practice, but they need time to find each other properly and establish new concepts.

THIS PAGE IS IN MAKING